Gamoswaana — The President, Dr Mokgweetsi Masisi has been applauded for planting a seed in the Kanye South constituency.

Handing over a Dorper ram to Ms Hilda Ramogomana and a Boer buck to Ms Keabetswe Roomane Dr Masisi donated through Presidential small stock initiative recently at Gamoswaana and Nneneke farming Harmlets respectively, the area MP Dr Lemogang Kwape said the President was stepping up both quality and number of small stock across the country.

He said the government had secured an Asian market for the small stock market that would require both quality and numbers and thanked President Masisi for preparing farmers for market demands.

Dr Kwape said the gesture was in sync with the founding national pillar of self-reliance and the Vision 2036 ideal of human and social development.

Dr Kwape also a Vision 2036 board member said he was pleased to see the fulfilment of the Vision in the everyday lives of Batswana.

He said the duo stories were a testimony that government programmes could give Batswana a push down the road if they were utilised with the right mindset.

District agricultural coordinator Ms Monia Mfolwe said Ms Ramogomana was assisted with eight sheep and 10 goats through the LIMID programme in 2011. She now has 36 goats and 60 sheep.

Along the way, she sold some and bought six cows, built a house and contributed P24 000 to fence her field through ISPAAD.

She now planned to drill a borehole in the farm through the same.

Ms Roomane has also been sustaining her family through the small stock she was assisted with in 2014.

She was given 13 goats but now has 41 at her farm in Nneneke.

She said the goats have enhanced her dignity in her community, adding that the project had enabled her to wed off her daughter, bought a wedding dress and food, something she said she could not have imagined if it was not for the project.

She now planned to connect her house to the power grid through proceeds from small stock sales. She said she was passionate about small stock and ecstatic that the buck would improve her flock.

He said it was imperative to pick deserving candidates for the donation to reinforce the spirit of hard work and commitment among farmers.

He also applauded Dr Masisi for the initiative and wished it could continue touching many other lives. 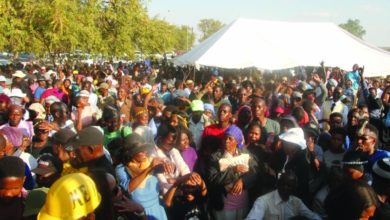