We’re just weeks away from the release of Marvel’s Black Widow, and we’ve all been waiting even longer than expected thanks to its many delays, but the first reactions to the new film have arrived and have us thinking it will be worth the wait. Following the delays due to the COVID-19 pandemic, Black Widow will finally be released in theaters and on Disney+ Premier Access on Friday July 9. When the film premieres it will be the longest gap between the release of Marvel Cinematic Universe feature films with over two years of time occurring between Black Widow and the last movie, 2019’s Spider-Man: Far From Home.

The upcoming film will be set between the events of Captain America: Civil War and Avengers: Infinity War, since Scarlett Johansson’s hero died during Avengers: Endgame. Talk of a Black Widow solo movie has been a long time coming. Despite being set in the past, Johansson told us on the set of the film she wanted a tale which moves the overall story forward.

“Post-Civil War felt like a good time to start. We never intended on doing an origin story,” Johansson said. “I never wanted to do an origin story because I just didn’t want to go back, back. I wanted to move forward, even though we are going back, but it all makes sense when you see it. It felt like a good time because Natasha, she has always been, she’s always worked for someone. She’s always been a part of some operation. She’s always had some safety net. Not necessarily, I don’t know if safety net is the best way to put it, but she’s always been an operative, and she’s actually never really had to, for better or worse, make any decisions for herself.”

Learn more about our time on the set of Black Widow here!

Joining Johansson in the film are fellow cast members Florence Pugh as Yelena Belova, David Harbour as Alexei/The Red Guardian, and Rachel Weisz is Melina. The film is directed by Cate Shortland and produced by Kevin Feige.

One of Marvel’s Best

#BlackWidow is one of Marvel’s best solo films.

Start to finish, the movie is great. Excellent surprises, emotional character moments, bad-ass action, and Scarlett Johansson finally gets to pour everything into the role.

#BlackWidow shows exactly why Natasha Romanoff was the glue that held the Avengers together. Shades of John Wick fight scenes & inventive action sequences wrapped in a heartfelt & poignant story about family & how the world treats girls. Excited to see Yelena carry the torch.

The #BlackWidow cast is great at building fun, larger-than-life characters, but Florence Pugh as Yelena Belova is an ABSOLUTE STANDOUT. Marvel fans will ADORE her. I walked away from this movie excited about her future involvement in the MCU. She’ll be an instant fan favorite.

I loved #BlackWidow…and it makes me angry. ScarJo deserved this film long ago. I loved everyone in it, but it bothers me so much that Marvel waited so long. ScarJo was amazing as always. Florence Pugh, I have loved in everything I’ve seen her in, and continue to do so. (1 of 2) pic.twitter.com/RdBvsFZlbg

Marvel movies are back! #BlackWidow is a tense, action-packed spy thriller that truly completes Natasha’s story in a visceral & emotional way. Florence Pugh CRUSHES it & is an instant MCU icon. This is like the MCU’s Bond movie w/ shades of MISSION: IMPOSSIBLE & THELMA & LOUISE. pic.twitter.com/bauc2XVQlF

#BlackWidow is a great action spy thriller, with some unexpected surprises.
The film is raw and emotional. Florence and Scarlett thrive together on screen while David Harbour is a scene stealer.
Scarlett goes out on top in what might be her final outing as the titular character pic.twitter.com/KHJtLOOnpz

Marvel fans rejoice: #BlackWidow is outstanding and an arguably S-tier entry in the MCU. Like Civil War, an aggressively bleak tone and dark story is balanced by legit LOL family comedy. Action is brutal; this is the first MCU film I’ve seen where stunts look like it hurts. pic.twitter.com/gkPLHGoPVb

The Right Kind of Prequel

Dug #BlackWidow a good deal! Was kinda worried about watching this story unfold knowing what’s to come in Endgame, that it might diminish the stakes, but that wasn’t the case. In fact, this is the kind of prequel story that feels bound to enhance other installments of the MCU. pic.twitter.com/sFcwHzW30Y

#BlackWidow has one of the best casts in a Marvel film. Scarlett, David, Rachel and Florence all have scene stealing moments that keep the movie moving briskly. It probably has the most action of any solo Marvel film and I felt like I was on a roller coaster the entire time.

#BlackWidow is a hard-hitting romp with thrilling action sequences, including a fantastic car chase, and the kind of vibrant performances that make the MCU such a special place to visit. It left me wanting to campaign for another #BlackWidow movie so, some things never change. 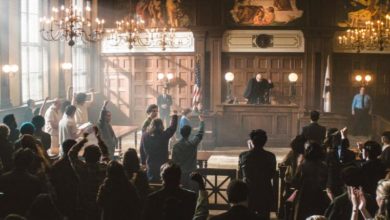 A Big Night For Netflix, Diversity, And Possible Game Changer For ‘The Trial Of The Chicago 7’ – Deadline