If you’ve ever wanted to eat fish and chips in Diagon Alley or drink a real Duff Beer like Homer Simpson, we know just the place to go. Universal Orlando‘s theme parks — Universal Studios Florida and Universal’s Islands of Adventure — are home to thrilling attractions, the fan-favorite Wizarding World of Harry Potter, and of course, plenty of places to eat and drink. You’ll need to fuel up when you’re not riding roller coasters or waving to characters, so we’ve rounded up the best Universal Orlando restaurants worth visiting on your next trip.

These Universal Orlando restaurants go beyond your typical theme park fare of chicken fingers and hot dogs (although you can find plenty of that around the parks, too). More recent additions to the Universal Orlando dining scene include eateries like Leaky Cauldron and Moe’s Tavern that immerse guests in their favorite films and television shows, even offering meals inspired by what they’ve seen on screen. Outside the parks, Universal CityWalk also has tons to offer, including popular national chain restaurants and unique dining experiences that the whole family will enjoy.

The Harry Potter-themed dining at Universal Studios Florida and Universal’s Islands of Adventure is a must for fans of the beloved series. The Leaky Cauldron is located in The Wizarding World of Harry Potter — Diagon Alley at Universal Studios Florida, and it serves British fare in a picturesque setting inspired by the films. Guests can get a traditional English breakfast, complete with eggs, black pudding, beans, bacon, and more before 10:30 a.m. (along with American breakfast choices), or opt for fish and chips, toad in the hole, and other British eats for lunch and dinner.

Fast Food Boulevard at Springfield, U.S.A., the Simpsons-themed area at Universal Studios Florida, is packed with quick-service options. There are a few choices available, including Krusty Burger (home of the Krusty Burger, of course), Cletus’ Chicken Shack, The Frying Dutchman, and more. Next door, find Moe’s Tavern, the iconic watering hole from the series, serving up Duff Beer and more. Nearby Bumblebee Man’s Taco Truck and Duff Brewery are great choices for bites and brews, too.

In the heart of Universal Studios Florida’s New York streets, you’ll find Finnegan’s Bar & Grill, the theme park’s take on a classic Irish-American pub. The menu includes bangers and mash, Guinness beef stew, and pints of beer. Plus, you might be able to sing along to some live music during your meal.

Video: Wendy’s Is Making a Major Change to Its French Fries (Food & Wine)

Wendy’s Is Making a Major Change to Its French Fries

It’s hard to miss the imposing, carved rock facade of Mythos, located at Universal’s Islands of Adventure in The Lost Continent land. Mythos is a table-service restaurant serving dishes that include influences from Mediterranean, Japanese, American, and more cuisines. Dishes range from light options like salads and fresh fish to heartier meals like lamb burgers and pad Thai, so this is an ideal spot when you’ve grown tired of basic theme park eats like hot dogs and chicken fingers. A range of cocktails, beers, and wines are available, too, making this a great place to stop for an appetizer and a drink when you need a nice break. The grotto-like interior is a pleasant departure from expansive food halls, or you can sit outside on the patio for a perfect view of the theme park across the lagoon while enjoying your meal.

There’s no lack of options at Universal CityWalk, so we’ve selected a few of our top picks. Antojitos has Mexican food, including tacos, fajitas, and much more, and sometimes there’s live mariachi music for entertainment, making this a fun way to end the day after experiencing the theme parks.

Burgers and sushi might seem like an odd combination — until you eat at Cowfish, that is. This Universal CityWalk restaurant takes surf and turf to a new level, with bento boxes combining mini burgers and speciality sushi rolls and the Cheeseburgooshi, which, as the name indicates, is a cheeseburger in sushi form. Of course, there are standard burgers and sushi available, too, plus fusion appetizers, salads, and cocktails.

Vivo Italian Kitchen is another CityWalk option featuring Italian eats like handmade pasta. CityWalk restaurants are often open after the parks close, so you can enjoy a full day of fun before taking the short walk over to CityWalk for dinner.

With over 50 types of doughnuts available every day, Voodoo Doughnut is the CityWalk stop for a sweet treat. This outlet of the cult-favorite Portland-based doughnut shop has been a popular choice among CityWalk visitors since it opened. It’s known for its fun and creative flavors, like the bacon maple bar doughnut, served in a pink box.

Elizabeth Rhodes is an associate digital editor at Travel + Leisure who loves all things theme parks. Follow her adventures on Instagram @elizabetheverywhere.

Cassper Nyovest brings out own liquor brand, and Pitso Mosimane is a fan! 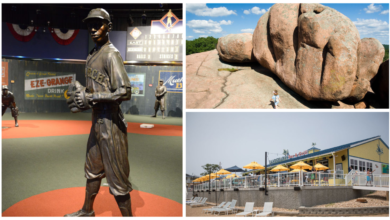 Ready to hit the road? 10 destinations worth considering – STLtoday.com