This post contains spoilers from Bachelor in Paradise season 7, episode 5.

Bachelor in Paradise picked up Tuesday night with enemies Aaron Clancy and Thomas Jacobs having some words on the sand over Tammy Ly ahead of the rose ceremony.

Aaron told Tammy she “completely” betrayed his trust by going after Thomas. “You’ve talked to him for one day and you completely sacrificed everything we had built and you will regret it like no other, I promise you, because he’s not a good person,” Aaron continued. “He’s not. I’ve seen it firsthand. And you’re willing to … the fact you sacrificed what we had for that after not knowing anything about him except for the sweet talk is mind-blowing to me.”

Tammy went to Thomas for comfort. “I feel terrible,” she cried. But soon enough, Tammy settled into her decision and she and Thomas kissed and canoodled on a daybed.

Meanwhile, Chasen Nick tried to salvage his relationship with Deandra Kanu by giving her a sparkly necklace — after Karl Smith gifted her a Pandora charm bracelet. Ultimately, Deandra, 25, turned down Karl’s gift.

In an on-camera interview, Karl, 34, called Deandra rejecting his gift “the biggest punch in the gut.” On the beach, he confronted Chasen, 33, about trying to one-up him.

“I just wanted to basically give her a gift just to let her know how much I appreciated her and the time we spent together, even if she finds something with you,” Karl told Chasen. “But then you give her a necklace the same day. That’s a little low.”

Chasen admitted he doesn’t usually give jewelry to women he just met. “That is a one-upper move,” Karl said. “I feel like calling you Captain One-Upper now.”

Watching Karl and Chasen fight from afar, Deandra didn’t know what to do with her rose. “I want to give Chasen the rose but I don’t know if he’s being genuine in how he feels,” she told the cameras.

Meanwhile, Tre Cooper realized that Tahzjuan Hawkins “wasn’t my person” — and told her as much. “Just to give you an idea of where my head’s kind of been at, I want you to know that I don’t feel that we are right for each other and I think that that’s on both of us,” Tre, 26, told Tahzjuan, 27. “I think our communication could’ve definitely been better.”

With that, Tre decided to leave the show. And so did Tahzjuan. “I’m just done with love,” she declared. “I give up.”

Guest host Lance Bass gathered everyone in the palapa to tell them that he too would be leaving, but he had one last surprise for the cast. “This is going to change everything,” he said before bringing out a new single — former Bachelorette Becca Kufrin.

Ivan Hall pulled Becca, 31, first and asked her why she wanted to come on Paradise.

“I feel like I’m trying to be more of a yes woman these days,” she explained. “And this is probably like, the only time in my life where I was ready and available, so I said, ‘Hell yeah! Let’s do it!'”

Becca also talked to James Bonsall, Karl and Aaron, who confessed to having a “major crush” on her. “If I get a date, I’ll probably ask you,” Aaron told Becca. “You’re super beautiful.”

Bartender Wells Adams informed everyone that the time had come for the rose ceremony, where the women would be handing out the roses.

Natasha Parker began by giving her rose to Brendan Morais. Maurissa Gunn offered hers to Riley Christian after their steamy one-on-one date, and Serena Pitt presented her rose to Grocery Store Joe Amabile. Abigail Heringer gave Noah Erb a rose and then Jessenia Cruz handed hers to Chris Conran following their date. Tammy, of course, gave her rose to Thomas and Demi Burnett to Kenny Braasch. Mari Pepin, after breaking up with Kenny, 40, asked James, 31, if he’d accept her rose — and he did. And after being tangled up in a love triangle, Deandra ended up giving her rose to Ivan, 29.

After many a switch-up during the last rose ceremony, the couples would only continue to be tested when some more ladies showed up to the beach. First, Tia Booth from Arie Luyendyk Jr.’s season of The Bachelor entered with a date card.

Tia, 29, pulled Thomas and Kenny to talk, even though she insisted, “I’m not trying to steal anybody’s man.”

Kenny wanted to touch base with Demi, 26, about the possibility of going on a date with another woman if Tia asked. “I would be bummed,” Demi admitted. “I mean, I don’t want you to, but I also don’t want you to be upset that you didn’t go.”

Never miss a story — sign up for PEOPLE‘s free weekly newsletter to get the biggest news of the week delivered to your inbox every Friday.

Kenny replied, “I didn’t feel like we were full-on dating or anything yet.” So when Tia did in fact ask him on a one-on-one date, Kenny accepted.

“I hope they have a terrible f—ing time,” Demi told the group.

RELATED VIDEO: Jessenia Cruz Talks About Exploring Her Options and Making the Most of Her Time on BIP

Before a new couple could potentially form, another nearly broke up. Abigail, 26, worried about the progress of her relationship with Noah, also 26, so she approached him about it.

“I think we’re more than friends but we’re not at a relationship level yet,” Abigail told Noah.

Noah felt like he wasn’t getting a lot of engagement from Abigail. “I guess I didn’t realize I was giving off that vibe,” she said.

“We might’ve slipped and it got too comfortable but are we able to even get to where … what we want by the end of this is the question,” Noah wondered to Abigail.

Noah decided he needed to “think for a minute” about the future of his and Abigail’s relationship.

For their one-on-one, Tia and Kenny got approached by three people to play volleyball in the zona sin ropa — area without clothes. The two women and one man stripped down and Kenny and Tia didn’t know what to do.

“We’re full flaccid wiener on the beach,” Tia quipped to the cameras.

Tia and Kenny discussed whether they felt comfortable baring it all on their first date. “I’m not showing my china pot,” she asserted.

Kenny deemed getting naked “a nice way to get to know each other right off the bat.”

After the game, Kenny and Tia toasted champagne on the beach and he caught her up on his Paradise journey thus far, which included dating Mari, 25, and then Demi. “I’m getting murdered in my sleep,” Tia said because of Kenny’s rich dating history on the show.

That didn’t stop Tia from making out with Kenny all over the beach, though.

Along with Kenny and Demi’s relationship possibly ending, Serena, 23, and Joe’s connection threatened to take a hit when Joe’s ex Kendall Long descended the Paradise stairs.

“I don’t want to just completely let go of him and I see Paradise as where we began,” Kendall, 29, told the cameras. “… I have love for him of course. We still loved each other when we broke up so I don’t know if we’ve ever really stopped having that connection. I definitely miss Joe.”

RELATED: Kendall Long ‘Did Not See’ Split with Joe Amabile Coming and Thought They Would ‘Get Married’

Kendall didn’t want to talk to anyone, stopping at Ivan, James and Brendan, 31, only to ask, “Do you guys know where Joe is?”

They pointed her to a daybed, where Joe was laying with Serena. “Hey, butthead!” Kendall greeted Joe.

She asked Joe to talk and he agreed, although to the camera the grocer cursed his ex’s presence. 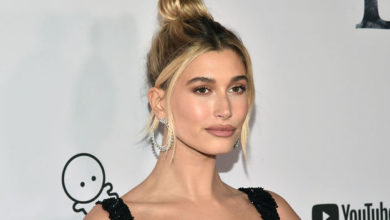 Hailey Bieber On That Viral TikTok That Said She’s Rude