Within two days we felt we belonged. My husband tutted at drivers hurtling too fast along the coast road, the kids named the shaggy Highland cows which shared their field with an incongruously fine-boned white horse (obviously given the moniker Ghost) near our cottage. I gave serious and lengthy consideration to buying a nautical rope doorstop for my landlubbing kitchen.

I sent friends photos of us larking and barking in the waves, artistic shots of ramparts and oyster catchers, a shadow in the water we unilaterally decided was a seal. A dolphin. Or a sea otter. Because those are the sort of gorgeous creatures you see in heaven.

And I meant it. Sort of. So why do I feel selfishly dismayed that Bamburgh has just been crowned The Finest Seaside in Britain, by Which? Magazine?

Surely everyone should have the opportunity to visit the Grace Darling Museum and the monument in the churchyard, erected by public subscription to commemorate the heroism of her sea rescue.

To stand on the beach, look up at the Castle and visualise the extraordinary sights those walls have seen. For now just the grounds are open; more than enough to fire our imaginations.

Most of all, just to be, in Bamburgh. It’s the sort of low key, stunningly beautiful destination that restores even the most frazzled brain back to its factory settings. Is it so terribly wrong to say I’d prefer to keep it that way?

My Edinburgh-born husband’s family used to holiday in Seahouses, a lengthy stroll along the beach or a five-minute drive. They would stay, he told the girls, in a five-star luxury hotel with glass walls that over looked the harbour, for a whole fortnight.

He came over all Proustian as he recalled his first ever kipper.

“We must go!” chorused our daughters, as he knew they would. “Let’s have a glamorous afternoon tea there.”

Magashule meets Mbeki, Motlanthe in 11th hour consultations for him to 'step aside' 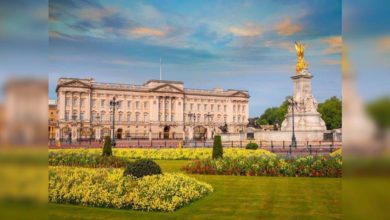 Buckingham Palace to reopen for visitors this summer