If you’re afraid of heights, the 165 pegs of hell that meander up Dave Evans Bicentennial Tree in Western Australia are the stuff of nightmares.

The tree, near Pemberton, is the tallest of two fire lookout trees that are open to the public in the area, and have become a trending attraction to tackle – one trembling foot at a time.

At almost 75m tall, it was pegged in 1988 as part of Australia’s bicentennial celebrations. Although it was built for visitors to climb and appreciate, it has been used on occasions as a fire lookout when aircraft were unable to fly.

Now, the climb has become a big social media attraction, with adrenalin junkies keen to reach the top platform. But be warned – this isn’t for the faint-hearted.

As TikTok user Adam Scott explained in his video of a recent climb he completed, the only way up is setting foot on a series of skinny metal pegs that were hammered in the side of the tree more than 30 years ago.

“Guys this is, without doubt, the scariest tourist attraction in Australia,” Scott says to his 28,000 followers ahead of the climb.

“This thing is so sketchy … how is it still open?”

The first platform Scott – and the other brave climbers who choose to ascend the tree – reaches is 25m above the ground. There are no guides, no safety ropes or harnesses – just you, your gut and what feels like a never-ending drop below each peg.

Oh, and be warned – there’s nothing to catch you if you fall. So hang on tight!

“If you miss a peg you’re probably dead,” Scott joked while filming his climb before reaching the top platform.

It’s one of the tallest trees in the world available for almost anyone to venture up, and others who have given the climb a crack say it’s the knowledge that one mistake could end in, well, death, that makes the whole experience so terrifying.

“If you are a thrillseeker you will love this climb,” one person wrote on TripAdvisor of the climb within the Warren National Park near Pemberton.

“Amazing tree to climb but definitely not for the faint-hearted,” another added. “There are large gaps between pegs so be mindful.”

But don’t worry – despite the big gaps and 75m drop at certain points – no one has actually died doing it. 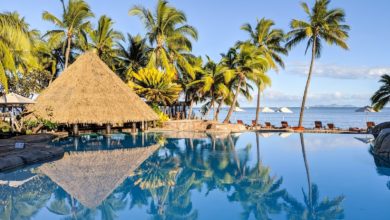 Holidays abroad: Top European resorts are ‘unlikely to be added to the green list before August’

What it’s like to travel to the Seychelles in the pandemic: ‘It really is another world’