Algerian anti-government protesters take part in a demonstration in the capital Algiers.

Abdenour Ait Said and Mohamed Chabti both helped topple Algeria’s veteran president nearly two years ago by taking part in mass street demonstrations against the ruling elite, but they no longer agree on the protests.

The protest movement, known as ‘Hirak’, brought tens of thousands of people to the streets each week for more than a year until the global pandemic hit Algeria in early 2020, forcing them to stop.

Now, as the demonstrations resume with thousands of people pressing once again for more comprehensive change, Ait Said and Chabti have taken different paths that reflect a wider debate among those who first took to the streets.

Ait Said, a 22-year-old biology student, still attends the protests. He wants the entire ruling elite that has governed Algeria since independence from France in 1962 out of office and the army to quit politics.

“The demands of the Hirak and its goals have not been achieved yet,” he said.

For Chabti, a 33-year-old teacher, the protesters won when the army forced out veteran president Abdelaziz Bouteflika in April 2019 and senior officials were jailed for corruption.

He sees the demands for more change as insulting the army, an institution closely bound up with Algeria’s painful struggle to end colonial rule.

“They criticise and demand change, but they do not offer alternatives. They do not even have a leadership to negotiate,” said Chabti of the protesters.

Late in 2019, the military pushed new presidential elections – decried by the protesters as a charade – that led to the victory of Abdelmadjid Tebboune on a low voter turnout.

This month Tebboune denied that the army had a political role and said he had responded to the protesters’ demands, citing the release of some detainees and plans to reform institutions.

Last year his offer to negotiate with Hirak led nowhere and his promises of economic reform have not materialised. Changes to the constitution he introduced as a sop to Hirak passed a referendum, but on a dismal turnout of 24%.

Tebboune’s position has won the support of some protesters like Chabti.

“Insulting the army and state institutions is not an appropriate way to make change. Striving for a better life requires peaceful manners,” he said, sitting in an Algiers cafe and backed up by his friends.

The disagreements about Hirak’s future have been sharpened by an increasingly tough stance from the authorities, in what the United Nations human rights agency described as a crackdown that has included many arrests.

Though street protests appear tolerated, people are hindered from reaching the marches by checkpoints and the U.N. Commission on Human Rights said hundreds of individuals had been detained.

Khaled Drareni, a journalist, was detained last year after covering the protests and sentenced to two years in prison on charges that included inciting a gathering and threatening national unity. He was freed after 11 months under an amnesty.

“Hirak has liberated many things and opened the way for freedoms and the expression of political opinion,” he said.

But, Drareni added, “the state of freedoms in Algeria is very bad… We must continue our fight for press freedom.”

This view chimes with Ait Said, who was one of the first to join the demonstrations in 2019 and who still walks in the front row of protest marches.

“Hirak must continue… Students and the people will remain in the field until the goals are achieved, God willing,” he said, wearing sports clothes and marching with a crowd in central Algiers.

Zanzibar aims to vaccinate 87% of population as denialism eases 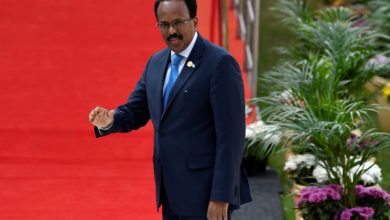