THE completion of the expansion of the Robert Mugabe International Airport will positively impact several sectors of the economy and catapult the country in realizing its vision of becoming an upper-middle-class economy by 2030, President Mnangagwa has said.

Upon completion, the modern airport, which will be one of the biggest in the region with capacity to process more than 6 million people annually, would position Zimbabwe as a major air traffic hub in the region.

The Second Republic is prioritising infrastructure development across various sectors, which is a primary means of sustainable economic development that also provides conveniences associated with an upper middle class income economy as envisaged in Vision 2030 and National Development Strategy 1 (NDS1).

Speaking yesterday after touring Robert Gabriel Mugabe International Airport which is being refurbished under a US$153 million loan facility, President Mnangagwa said: “The completion of this project should boost the current positive growth and transformation trends in trade and tourism in the country and help to create synergies within the global value chains. To achieve this, closer collaboration among the civil aviation authorities, trade and tourism promotion authorities must be strengthened.”

He commended China for extending support for the construction of the airport under the two countries’ Comprehensive and Strategic Partnership Framework, a testimony of the elevated bilateral relations the two countries enjoy.

President Mnangagwa said he made several requests to his Chinese counterpart, President Xi Jinping in 2018 during an official visit in Beijing who agreed to the requests even though Harare still had outstanding debts from previous facilities.

“The President of China, in spite of the status of the Government of Zimbabwe’s indebtedness to several Chinese companies which in principle would have constrained China to extend facilitation to further projects because of that indebtedness, President Xi Jinping made a political decision and granted three things,” said President Mnangagwa departing from his prepared speech.

The three projects granted were the Hwange Thermal Power project to the tune of US$1,3 billion, the RGM International Airport refurbishment and modernisation and a grant to construct the New Parliament Building.

“As one of the critical gateways and busy ports of entry for our international visitors into Zimbabwe, the new-look designs and envisioned aesthetics of this Robert Gabriel Mugabe International Airport are indeed a reflection of the image, rich heritage and culture of our great country. This heritage along with our warm hospitality as a nation, should be evident and displayed at all ports of entry throughout the country,” he said.

“We are not worried about those who get angry because China has helped us. We will continue to develop our country. Nyika inovakwa navene vayo, ndozvatirikuita izvi (A country is built by its people, that is what we are doing).”

Turning to the construction works, President Mnangagwa said the country continued to embark on huge projects despite being under the yoke of sanctions imposed by the United States and Western countries.

President Mnangagwa urged other supporting service providers and complementary facilities to ready themselves for investments in and around the expanded airport in areas such as accommodation facilities, airport transfer services, food and beverage outlets as well as ICT facilities among others.

President Mnangagwa said the recent coming in of other airlines such as Qatar Airways was a testament to his Government’s commitment to realise economic growth through the opening of airspace.

“The addition of this and other airlines into our skies must translate into increased inbound and outbound passengers and tourist arrivals as well as the exponential growth of export cargo. It is my anticipation that we will be able to attract more airlines and increase frequency of the existing ones when this project is completed,” he said.

“Once completed, the infrastructure will compete favourably with other leading nations in the region in terms of air transport facility and modern destination.

“Invariably, the thrust is to enhance the easy of doing business, facilitate tourism and investment,” he said.

He said the project which started in April 2019 was expected to be completed in June 2023 and created 700 jobs.

“The contractor, China Jiangsu International Economic Technical Cooperation, a Chinese company was executing its works with distinction. The level of craftsmanship, handiwork and artisanship that they have demonstrated as they construct this behemoth project is spectacular,” he said. 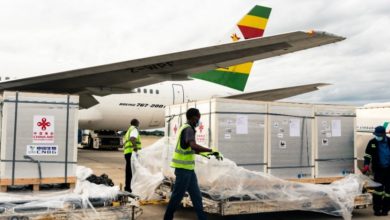