Screenshot from a tweeted video by username @LoveWorld_Peopl showing transpired events during the Algeria protests.

Algerian police prevented a pro-democracy protest rally from taking place in the capital Algiers on Friday and detained several people including journalists, among them an AFP photographer, AFP correspondents said.

Demonstrators were preparing to take part in the weekly Hirak movement protest when they were jostled and taken into custody by police in the city centre, an AFP journalist and other witnesses said.

AFP photographer Ryad Kramdi was detained in the working-class Bab El Oued neighbourhood for an identity check and was taken to a police station.

He was released in the evening after eight hours in detention.

Kramdi said he had been taken to a forensic doctor before being released without explanation.

“We were well treated but it was very stressful,” he said after his release.

Around ten other journalists and photographers were also detained, among them Khaled Drareni, correspondent for French-language TV5 Monde and press freedom watchdog Reporters Without Borders (RSF), according to the CNLD prisoners’ rights group.

It said some of those detained were released later in the day, though Drareni was not among them.

“Several journalists were detained and prevented from covering the 117th Friday Hirak protest, while others were manhandled by the security forces,” RSF tweeted.

Drareni, also the founder of the Casbah Tribune online news site, became a symbol of the struggle for press freedom in Algeria after being incarcerated for almost a year.

Marches went ahead in other Algerian cities, including Oran, and in Bejaia and Tizi Ouzou in the northern Kabylia region.

The CNLD reported numerous people taken into custody across the country, from Hirak activists to opposition figures including Mohcine Belabbas, head of the Rally for Culture and Democracy (RCD).

The interior ministry this week said that Hirak protest organisers would have to advise authorities of protests in advance, a move that comes amid mounting government pressure on the movement as elections approach.

A statement from the ministry said:

Rally organisers must declare to the relevant authorities the names of the organisers of the march, the start and finish times, the itinerary and the slogans. Failing to respect these rules renders the march illegal and will lead to punishment.

The largely leaderless and politically unstructured Hirak movement was launched in 2019 over president Abdelaziz Bouteflika’s bid for a fifth term in office.

The ailing autocrat was forced to step down weeks later, but the Hirak has continued its demonstrations, demanding a sweeping overhaul of a ruling system in place since Algeria’s independence from France in 1962.

Marches were suspended for around a year due to the coronavirus pandemic, but protesters have returned to the streets since February as the movement regains momentum.

The Hirak has rejected early legislative elections scheduled for 12 June, and human rights organisations have warned of increasing repression in the lead-up to the polls.

The CNLD says over 70 people are currently imprisoned in connection with the Hirak movement or cases related to freedom of expression.

Nigeria orders broadcasters not to use Twitter to gather information 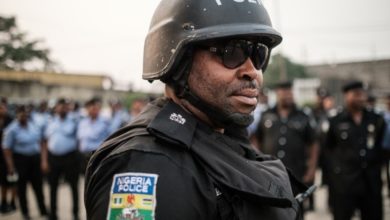