PwC’s employment scenarios are based on different perspectives on a third wave of Covid-19 infections hitting the country in 2021.

Despite the rollout of a vaccine programme, medical experts agree that the pace of vaccinations will not spare South Africa from experiencing a third wave – currently expected to hit around the middle of they year.

The severity of this mid-year wave, and the accompanying strictness of associated lockdowns, will directly determine the nature of the economic recovery, PwC said.

“Under our baseline scenario, South Africa’s economy will grow by 3.5% this year, and add 420,000 jobs. We expect total employment to return to 2019 levels (i.e. pre pandemic) by 2025. However, by then, a large number of new workers will have been added to the labour force.

Another problem facing the country is inequality, and more than 25 years since South Africa’s first democratic election the data shows that inequality has increased rather than decreased.

Citing data from the World Bank, PwC said that that South Africa’s consumption expenditure Gini coefficient of 0.63 is higher than the most recent coefficients for any other country.

The Gini coefficient is one of the most common measures of economic inequality with values between 0 to 1, where 0 indicates a perfectly equal distribution.

“Social mobility is so constrained that, assuming constant social mobility levels, it would take nine generations for people in South Africa to reach the median income level.

“By comparison, this number (of generations) is seven in China and India, six in Germany and France, five in the UK, and only two or three in Scandinavian countries.”

While there have been improvements in welfare and basic services coverage since 1994, poverty levels remain high, PwC said, citing data from Statistics South Africa’s most recent living conditions survey which was conducted in 2014/2015.

According to this, approximately half (49.2%) of the adult population were living below the upper-bound poverty line (UBPL).

“Persistent inequality and prevalent and extreme levels of poverty have been exacerbated by Covid-19 and the associated economic decline,” PwC said.

It added that business confidence, as measured by the BER Business Confidence Index, has consistently declined since 2006.

“With the effects of the Covid-19 pandemic, business confidence, as measured by the RMB/BER Business Confidence Index, has consistently been in negative territory since 2014.

“With the effects of the Covid-19 pandemic, the South African economy contracted by 7.0% in 2020, and will grow by 3.5% in 2021. However, we estimate that it will take approximately four to five years for the economy to return to 2019 levels.” 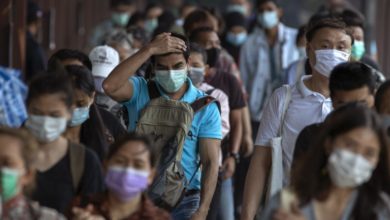 The Latest: WH: $4B to American Indian tribes for virus | Business News

Britain stands in ‘full support’ of Czechs after Russian expulsions